2000 Record
Brandon saw limited action durng his first year on the team as he developed his strokes. He won his only singles match of the year 11-9.

2001 Record
Brandon played in all matches in 2001. He had a 9-6 record in doubles and had many close singles matches.

2002 Record
Brandon’s senior year was a very successful one. He ended up with a 11-4 record at #3 singles and a 12-2 record at #2 doubles. Two of his best wins came at doubles in the Valley District tournament where he and Chad won the decisive 5th point in both the semifinal and final matches. Brandon’s senior year was highlighted by eleven consecutive wins at singles including a come-from-behind 10-8 win over Lee High.. He enjoyed the fan support throughout the season.

This summer, Brandon will be heading to the beach for a week, work for his dad, and attend Young Life camp at Lake Champion, NY.

Brandon’s greatest assets are his groundstrokes. From the baseline he has no weaknesses; his forehand and backhand are both strong strokes hit with a form that younger players should emulate. His height helps him pound serves in and makes him a formidable net player. Brandon is very athletic, having played basketball for FDHS throughout high school.

Hands down, Brandon would win the Most Improved Player award if one were given. He has gone from being a beginner in 2000 to a force in 2002. And his improvement has come because he has practiced and practiced and practiced. Always available to hit, Brandon has worked on his strokes until they are accurate, steady, and powerful.

Next year Brandon will attend James Madison University. He is undecided about his college major. 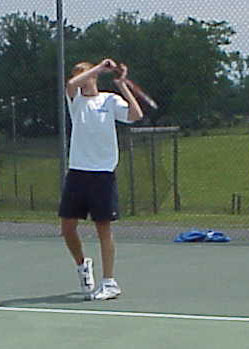