1999 Record
During his freshman year, he had a 14-5 record despite playing the top player at each school he faced. Four of his losses were to the same player, Nathan Maust of Harrisonburg, whom he came close to beating in several of those matches. He was runner-up in the Valley District Individual Championships to Maust and made it to the Regional semifinals before falling again to Maust. In doubles, it was a learning year for him and Scott. They finished the season with a 8-7 record.

2000 Record
In his sophomore year, he had an undefeated regular season and was runner-up in the Valley District Individual Championship, losing a tight match to Matt Chenault of Harrisonburg in the district tournament. He had beaten Matt twice during the regular season including one memorable match in which he came back from a 9-3 deficit. He also defeated David Swecker from Central, who was State Runner-up in Single A the previous year. In Regional play, he also had a great win over Handley’s Matt Stillwagon who won the AA Championship the following year. His singles record for the year was 18-2. Jim and Scott won the Valley District Doubles Championship with a tight 11-9 win over Harrisonburg’s Chenault and Edelman in the tournament finals. In the Regional Tournament, they reached the finals before dropping a highly contested match to Stillwagon and Mocarski of Handley. He shared the Indian Award with Scott in 2000.

2001 Record
In his junior year, he won the Valley District Individual Championship. His only loss during the regular season was a season opening defeat to Dom Manilla of Western Albemarle, who won the Jefferson District Championship. Jim got his revenge during a later match in the season with Dom. In the Valley District, Jim had no close matches, won 16 consecutive matches, and ended his year with a singles record of 16-2. He lost in the Regional Finals to eventual state champion Matt Stillwagon from Handley. Jim and Scott won 18 consecutive doubles matches and dominated the Valley District Doubles Championship before losing to eventual state champions Stillwagon and Hicks from Handley. Like 2000, he shared the Indian Award with Scott in 2001.

2002 Record
In his senior year, Jim continued the tradition of dominating the Valley District. He won 16 consecutive matches and repeated as Valley District Champion. In the Valley, he had no close matches; in fourteen Valley District matches he lost a total of ten games and eight times won his match 10-0. Likewise in doubles, he and Scott had no peers in the Valley, winning their third consecutive Valley District doubles crown. In the Region II Individual Tournament, Jim reached the finals after two great wins over Mace from Liberty and Jordan, the Dulles District Champion. He lost in the Regional finals to Stillwagon of Handley, the defending individual state champion, who was the only player to beat Jim this season. For the season, Jim had a 18-2 record. He and Scott reached the Region II semifinals before suffering their only loss of the season, 6-4, 7-5 to Stillwagon and Hicks of Handley, the defending state champions. For their careers, Jim and his sister Kay won over 260 singles and doubles matches for Fort Defiance High School and every match was played at the #1 position. Jim’s overall record in singles was 66-11 and his doubles record was 53-13.

Jim has said many times that his greatest competition during his four years at FDHS has been his friendly rivalry with Scott. Undoubtedly, they were the two best tennis players in the Valley District again in 2002.

He has an arsenal of strokes not found on many other high school players. He hits one hand forehands, two hand forehands, one hand backhands, and two hand backhands all with lots of topsin and picture-perfect form. He serves left handed but volleys right handed. If a lob goes over his left, he hits left hand overheads. But if it goes over his right he hits right hand overheads. He is known to be too hard on himself while on the court with an occasional outburst of emotion. But he is very team oriented and even strings the rackets for the boys on the team.

Jim can play a serve-and-volley game but is usually content to win his points from the baseline. He is a particularly good counter-puncher, hitting strong passing shots, good returns of service, and well-angled ground strokes. His favorite shot is the back-to-the-net-between-the-legs shot he hits when a lob goes over his head.

Jim will attend Virginia Tech this fall. He is unsure of a major; perhaps Spanish. 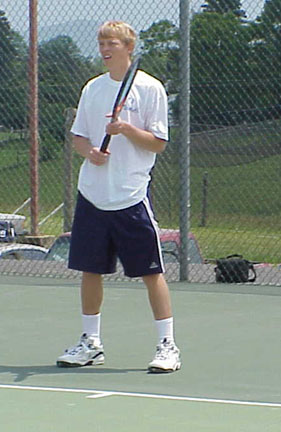